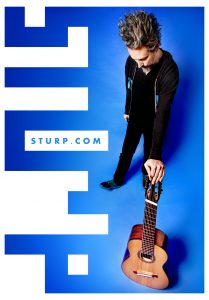 What is STURP?
STURP is instrumental music: Guitar, banjo and drums.
Because of the frequent use of distorted guitars one could call the genre ‘Instrumetal’.
STURP is from Amsterdam, the Netherlands.
STURP is a solo-project.
STURP has released 3 full-length albums.
– Rapid Germination (2014)
– Fumigation of Grain (2016)
– Extensive Alpine Terrain (2019)
All three albums got strong underground press.

STURP is also performing live, as a duo: Richard on drums and Daan on strings.
Watch the SturpStreamTeaser: the promo for Sturp LIVE!
Double-click for full screen.

STURP LIVE!
The first live appearance was the 23rd of June 2018, Nieuw en Meer, Amsterdam.
During the corona crisis there were no possibilities to play live on location, so from May 2020 on STURP started streaming live on YouTube.
The past streams can be found at www.sturp.com/live, but fresh streams will also be announced on a regular basis so you can experience STURP live!

The term STURP was also used for the Shroud of TUrin Research Project. That project was not related to sonical outbursts.

One would say that because of the link to the shroud there’s more to STURP than meets the eye. Well, that’s not the case as STURP has no religious connections, but recently something remarkable occurred. As I was making the artwork for the STURP custom printed picks, I noticed that the STURP-logo upside-down looked like it read ‘d SUS’. How close is that to Jesus! So the STURP-logo seems to have AT LEAST as much of Christ in it as the Turin shroud has. Remarkable indeed. Pic (or pick as you like) to prove! 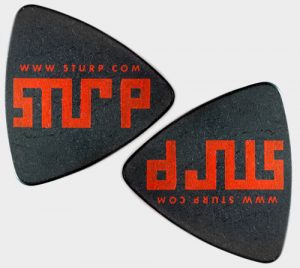 And another fun fact: the file-size of the MP3-file of the very first STURP-track (The Beard) turned out to be 6.66MB!